Yesterday, Metallica has streamed all the new songs from their album "Hardwire.. To Self Destruct" every two hours. The first three videos, “Hardwired,” “Moth Into Flame” and “Atlas, Rise!” were pretty standard with shots of Metallica performing in a rehearsal space. The rest of the videos, however, were just the opposite as each focused on a specific narrative. Overall, the album itself is divided between massive, mid-tempo grooves and freight train-like speed, offering some

Progressive legends Rush have expressed a desire to continue writing despite drummer Neil Peart announcing his retirement, at least from touring. In a new interview, Geddy Lee opened up about possibly being off the road forever and the possibility of one-off Rush gigs. Both frontman / bassist Lee and guitarist Alex Lifeson were guests on The Strombo Show, hosted by George Stroumboulopoulos. The two discussed all things Rush, including receiving a key to the city of Toronto, t

An Iron Maiden Christmas sweater and scarf have launched in time for the festive season. Alternative fashion brand Middle Of Beyond are the firm behind the officially licensed items. The sweater is 100% acrylic and is available in black, dark grey, light grey, red, tan, and white colours. It's decorated with the band's mascot, Eddie, and bears a repeat pattern. The scarf is also 72 inches in length and seven inches wide. The jumper can be purchased for $85 and the scarf for $

In a new interview with Ultimate Classic Rock, Iommi reflected on the both the beginning of his Black Sabbath career as well the finality. When asked if he goes on vacation after tour, the riff master responded, “No, a vacation for me is to be at home. But I’m not going to leave the music business. I still want to write and play and I’ll be doing some TV for something over here in England called Guitar Star. But I love the playing, I love gigs, I just can’t travel anymore.”

Happy Halloween and happy “Atlas, Rise!” day! Metallica made good on their promise to release a new song on Halloween, with “Atlas, Rise!” being the third new song to come from their Hardwired … to Self Destruct album. You can hear it in the player above. As you can hear, it’s another epic track from the mighty Metallica, giving a solid, driving and lengthy instrumental introduction before James Hetfield’s vocals kick in. The track itself is full of driving guitar, Hetfield’s 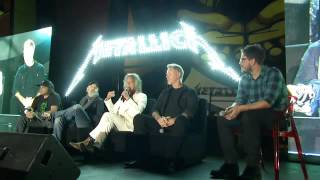 James Hetfield: 'I Don't Know Why We Waited So Long'

Around 500 METALLICA fans were lucky enough to attend a special question-and-answer session with the four members of the band on October 29 at Polyforum Siqueiros in Mexico City (video above). On what inspired them to make their new album, "Hardwired... To Self-Destruct", due for release on the band's own Blackened Recordings on November 18: Kirk Hammett (guitar): "Maybe because we were late on making it." James Hetfield (guitar, vocals): "It's what we do; we make music. It t