Dave Mustaine has described late drummer Nick Menza as “a great friend, a true professional and a larger-than-life personality.” He’s paid tribute after Menza, who appeared on four Megadeth albums, died suddenly aged 51. Reports suggest he suffered a heart attack while performing with current band Ohm in California on Saturday. Mustaine says: “We asked Nick to join Megadeth in 1989. Our first album with Nick, Rust In Peace, and subsequent albums Countdown To Extinction and Yo 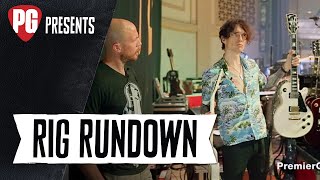 Premier Guitar's Chris Kies hung out with Dan Hawkins, Justin Hawkins and Frank Poullain of The Darkness before their gig at Memorial Auditorium in Nashville, Tennessee. This is (by far) one of the most funny Rig Rundown in their series of interviews, check the video below: Read more at: Premier Guitar